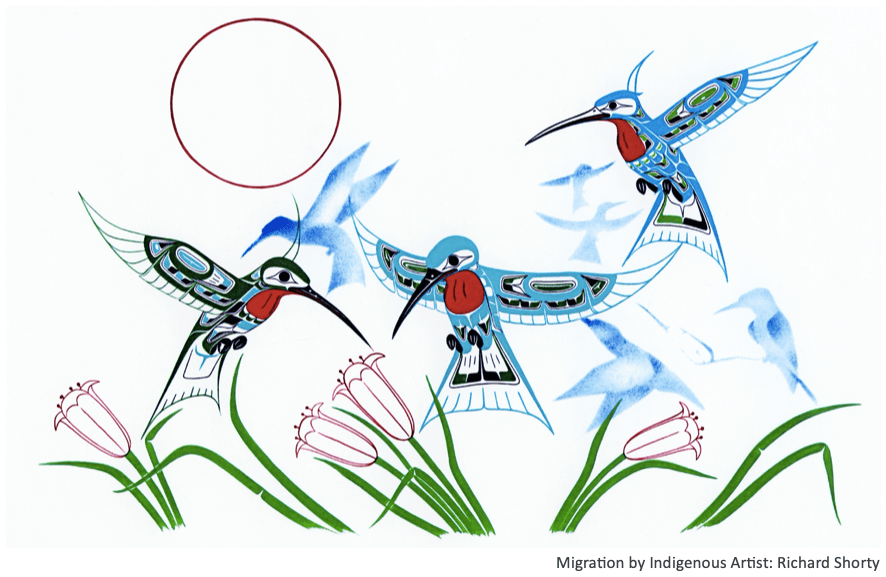 As an annual event hosted at the University of Victoria, IDEAfest is a week-long festival that is centred around the sharing of research, art, and innovation. Each year, events are hosted across campus by different organizations with an open invitation to all that wish to attend. In 2020, the theme “Ideas that can change everything” featured an event by the National Consortium for Indigenous Economic Development (NCIED), which organized a panel of six community leaders from Indigenous Nations across BC. WISE: Wellness and Indigenous Sustainable Economies, was the name of this event because the purpose of this panel was to generate discussion around economic development in Indigenous communities that can be created in a self-sustaining manner.

The event began with John Borrows, Canada Research Chair in Indigenous Law at the University of Victoria, introducing the panel and the topic of discussion. One of the panelists, Tom Child, then gave a drum song in his Nation’s language that captivated everyone in a warm welcome. From there, the night was filled with fascinating recollections from each of the panelists as they shared their values and principles that have guided them through life. In doing so, they also shared how economic development has made an impact in their communities.

The first to speak was Christina Clarke of the Songhees Nation who elegantly tied together the goals and objectives of her community with real world examples of sustainable partnerships. Throughout the presentation, she highlighted Songhees values which emphasize the importance of relationships with love, respect and forgiveness. Christina also addressed the detriment of The Indian Act and how the path to reconciliation has only just begun.
Up next, Tom Child was called back to everyone’s attention as he spoke to the history of the Kwakiutl Nation and how the past has impacted the way they perceive economic development. While the Kwakiutl people have been open to innovation through partnerships creating wind power infrastructure in their Nation, Tom also addressed the serious issues of how laws were imposed on the Kwakiutl Nation that interrupted their previous practices and indirectly resulted in this change.

Peter Lantin took a unique approach to addressing economic development in Haida Gwaii by using only a map of the Nation for his powerpoint. In a powerful representation, he detailed the evolution of pre-colonial ownership of the land being entirely Haida owned, followed by decades of unsustainable industrial logging and, over time, incremental Haida reclamation of the land base; he concluded with a postcolonial reconciliation that was identical to the pre-colonial map.

After a brief intermission, Tricia Thomas recaptured the crowd with breathtaking visuals that she has taken throughout the Halalt Nation. Her stories carried us through an acknowledgment of the past, the witnessing of the present, and the creation of a vision for the future of the Halalt Nation. In conclusion, Tricia perfectly summarized her presentation when she said “Imagine what we can accomplish when we all work together.”

Following Tricia, Art Mercer of the Nisga’a Nation took a comedic approach that lifted spirits while still being highly educational. Using the examples of salmon and land ownership, Art detailed how several challenges of the past have been overcome throughout the generations. He also brought up an interesting topic of the separation of programs and services from commerce which can often become blended in reconciliation attempts.

Covering a range of topics, Anna (Sam) Hudson concluded the presentations with personal stories that were touching and powerful. She mentioned how her UVic degrees in Law and Public Administration have helped guide her to exactly where she wants to be which is helping fellow Akisqnuk people. Similar to Tricia’s reference of the past, present and future, Anna referenced these with a different perspective of the land, language, and people of Ktunaxa representing each, respectively. To conclude, Anna quoted a translated phrase “go into the future with a drum in one hand and a computer in the other.”

Following the panelist presentations, the audience was invited to engage in a Q&A which resulted in a variety of questions and responses. Personally, the most powerful response was to a question from a PhD student who asked how culture is incorporated into the practices mentioned during the presentations. Christina Clarke beautifully captured the opinion of all the panelists with a simple response being that there is no separation of culture from practice, as it is simply a way of life that is carried forward in everything they do. Concluding the Q&A, John Borrows gave a thank you speech followed by another unique, and powerful drum song.