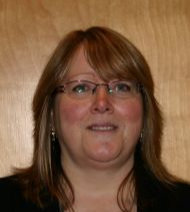 Jacquie Ridley is the Chief Operating Officer for Tribal Resources Investment Corporation (TRICORP) and has been with the corporation for nearly 18 years. Jacquie has worked in many positions at TRICORP since her initial employment in 2000 as receptionist, and has also held the positions of Loan Administrator, Office Administrator, and Administrative Manager.

Jacquie’s areas of expertise include financial management, human resources, and operational planning. Jacquie completed management courses through the University of British Columbia’s Sauder School of Business, and a Masters Certificate in Project Management from the University of Victoria. Additionally, Ms. Ridley has taken many accounting and financial courses at the BC Institute of Technology, Thompson Rivers University, and the Northwest Community College. She is presently taking online courses through TRU and working towards a masters. Jacquie currently sits as a Board Member with the Aboriginal Business Service Network (ABSN); and First Nations Human Resource Labour Council.

Jacquie Ridley has fully embraced the idea of lifelong learning in her 18-year journey from receptionist to COO of the Tribal Resources Investment Corporation. This lifelong ‘Rupertite’ is a shining example of the value of adult education.

Professional Journey
Jacquie moved to Prince Rupert at a young age, and has called the community home for the last 48 years. As a young stay at home mother, Jacquie decided it was important to continue her education and receive her dogwood diploma. Though she had the option to do a shorter adult GED option, she decided to complete the regular program. As Jacquie explains, “I wanted my Dogwood Cert to look no different than my kids would when they graduated.” Following her graduation, she worked for several years, as many young people do, in the service industry. In what has become an ongoing theme in Jacquie’s life, she decided that she wanted to move forward professionally, and once again began working on her education from home. As she says, “my educational background never ends. I’ve done a lot of college programs and I’m still working towards a Masters in business.”

Jacquie’s move out of the service industry started with Northern Native Fishing, where she worked for 5 years. She eventually went on to work for the First Nations Health Authority for “a couple of years”, and then moved on to her initial position with TRICORP. As Jacquie puts it, “I am just now going into my 18th year. I love my job.” In her position as receptionist she was introduced to “loan clerking”, which led her to the discovery of her professional passion: financing. Her enthusiasm for the field of financing eventually led to her current position as COO and, while her role has changed, she is still involved in finance. As COO, Jacquie occupies a role that is very closely aligned with that of a traditional CFO, focusing more on budgeting, reporting, and tracking.

TRICORP and ACE – A focus on community
When asked about TRICORP and its role in the greater community, Jacquie says that “our interest is our clients, and our communities”. As Jacquie explains, TRICORP doesn’t “advocate for industries that come to our door, that want to get into a community. We work with them, and we may introduce them, to give them links to that community, but we don’t involve ourselves in any of their negotiations.”

When TRICORP took over the Aboriginal Skills Employment Training (ASETS) delivery in the region it was a huge learning curve because it was not the original focus of the corporation. TRICORP had to quickly pivot from their primary focus on development to a diversified focus on a combination of roles, including training and education. Even so, Jacquie says that TRICORP CEO Frank Parnell was still considering “How [would that] link with business development?”
“Because eventually everybody becomes their own entrepreneur in some form or another, [whether] it’s out marketing yourself, or trying to start a business. That’s what [Frank] saw, that there was a good linkage between training and becoming entrepreneurs, and building up the entrepreneur side of things.”

Since that time 9 cohorts have graduated from the NW-ACE program, and the contributions they have made to the local economy and community have been considerable. While not all ACE graduates “have storefront businesses”, many have “started businesses in their own homes.” Jacquie points out that there is wide diversity to the businesses ideas emerging from the NW-ACE program: “there are hairdressers, artists, tattoo artists, and tradespeople.” One of those cohorts consisted of “tradespeople”, and taught them the procurement process while also providing a business education that is not present in traditional trades training. She points out that a business does not just start with the individual saying “I want to do this and it’s going to happen. They [also] have to know the background of the financial [aspects] . . . and reporting on government requirements.”  Jacquie believes that “the ACE program is monumental to answering those questions, and addressing them so that these individuals can get out there and have a better opportunity to succeed because they have the background knowledge.”
The individuals that come through TRICORP are one of the primary reasons for Jacquie’s job satisfaction. As she says, “one of my favourite things is seeing and hearing individuals coming in [excited] because they just finished a training course and they received their certificates and know they can go out and get a job, or they have the certificate which helped them get that job.” According to Jacquie, there have been many instances of success, such as a young lady who was able to land a contract as a Chief Safety Officer in Nova Scotia. She says that seeing “people grow”, and seeing their pride over what “they have achieved”, is “really gratifying”. Jacquie is also quick to clarify that the success of these individuals is their own, “we have just helped them in the process. The work is up to them. That is the part that I think is the best. They do the work, we give them the resources to use to succeed.”
Jacquie explains that “You’re like the proud parent sometimes when you see the success and hear the stories of how they worked to get there.  The other day one the Program Officers shared a story about a female client, left by her husband with nothing, [who] fortunately had the support of her family and now going into her third year of carpentry. Not everyone’s path is smooth and these are the individuals that show you its possible to achieve your dreams.”

Advice for ACE students
Jacquie states that it is important to “keep an open mind because you don’t always arrive and leave with the same idea. You might come in here with one big plan and it may not work out. So, to be open minded about what your opportunities are and what you can and cannot accomplish”, or rather, “what might be challenging to accomplish.” For Jacquie, commitment and perseverance are critical to success in the ACE program: “A lot of dedication has to be there. It’s not just to take a training course. Hopefully when they come in here [they can really] develop a plan that they want to follow through on. It might be inside or outside of their community, but it’s going to help them build a base for their future success.

The Personal and Professional
When asked about her life outside of TRICORP Jacquie humorously deflects the question, stating “I’m pretty dull”; however, when she does open up she reveals a quiet life spent reading, scrapbooking, and knitting. She also enjoys journaling, as she works on completing a private memoir for her two children, a dental hygienist in Vancouver and a Red Seal Welder in Kelowna, to read in the future. She is also committed to continuing education in her personal time, saying “I’m actually doing a Provincial Instructor Diploma Program right now through Vancouver Community College. I wanted to be able to understand what teachers do, how they develop curriculum . . . some of the ins and outs of it”. So even when she is relaxing, she is engaged in professional development. Even though she spends time outside of her duties at TRICORP engaged in what might be modestly described as ‘professional development’, at heart she finds comfort in her home. She enjoys her quiet time at home with Fred, who she has been married to for nearly 35 years. Jacquie’s husband is “from Hartley Bay (Gitga’at) of the Eagle clan and a fluent speaker of the language, one of the few left from Gitga’at. I am Ganhada (Raven clan), adopted by his aunt.

Hartley Bay is located approximately 90 miles south of Prince Rupert, accessible only by boat or plane. The culture is rich, many of the traditions [are] followed and taught to the younger generation”. She cherishes the quiet time she enjoys with her husband and as she “gets older, [she] likes being at home.” Even so, her contributions to the community do not end when she leaves her job at TRICORP.

Recently, she joined a group called Redesign Prince Rupert, a “civic engagement project to develop and implement strategies for economic diversification and community resilience” (Redesign Rupert). One of the projects Jacquie has been involved with, the 3rd Avenue Art Project, aims to beautify the downtown core with local art. With the economic struggles of the last 20 years there are many empty storefronts in downtown Prince Rupert, and the group aims to present an aesthetically pleasing cruise ship visitor experience by creating an art tour: “we’re working with the ICE gallery. The ICE gallery has an array of art done by local artists, such as paintings, carvings, pottery, and crafts it exhibits art from different artists for a commission. People put their artwork in there and they sell it on a commission, but it comes from all over the north not just Prince Rupert. The intention is to be able to take some of those artworks with the permission of the artists, and place them in the storefronts (empty businesses) and decorate their front windows to make them more inviting”. Even though it is out of her normal scope of activities, Jacquie says that she got involved because she wanted “to get more involved in the community.”

The ACE program is grateful to Jacquie Ridley for the work she does at TRICORP, which provides ongoing support and guidance to the ACE program, Indigenous entrepreneurs, and the greater community. If you would like to know more, please follow these links:
TRICORP homepage NW-ACE homepage First Nations Health Authority
Redesign Prince Rupert